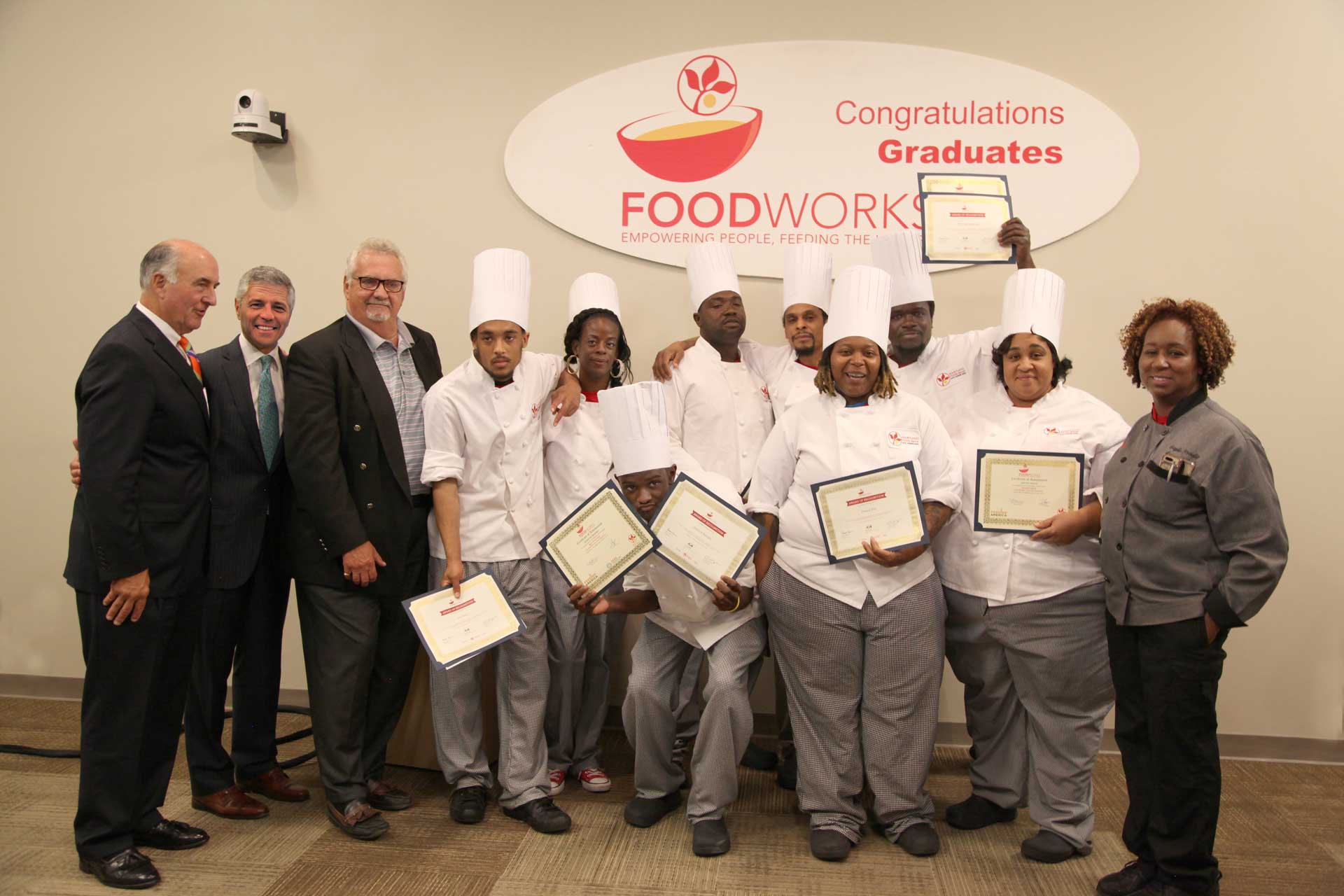 FoodWorks Class 28 students came to our intensive 12-week culinary training program from a variety of backgrounds, having overcome their own individual hardships. They leave as graduates with ServSafe Manager certification, job readiness skills, and a new direction – one that leads to self-sufficiency. Here are some of their stories.

Michael’s smile was a constant throughout the 12-week culinary training program. Whether in the classroom or cooking in the Charles T. Bauer Community Kitchen, Michael was smiling. It was one of those genuine smiles that spoke of true happiness. Up until I sat down with Michael, I didn’t realize that smile was a result of overcoming more hardships than most of us can imagine.

“I had a mother who was addicted to drugs for the most of my childhood until some of my adult life,” Michael explained. “But she couldn’t care for me properly, so I left Baltimore and went to Vegas.”

Michael lived with family members in Las Vegas until an unexpected call brought him back to Baltimore — his mother had passed away. He flew back to pay his respects.

What Michael didn’t realize was that the next several years in Baltimore would be the most challenging of his life.

“I’ve dealt with so much since I’ve been back in Baltimore. I’ve dealt with adversity and homelessness,” Michael said. “I was sleeping on the street. I was at my rock-bottom when I came back. I was homeless for almost three years straight.”

Michael admitted that food insecurity was an ever-present reality for him during that time. His personal experience with hunger heightened his enthusiasm for FoodWorks — during the program, he was not only able to receive his ServSafe Manager certification and job readiness training, he was also able to help produce thousands of meals for food-insecure Marylanders.

As for Michael’s future?

“I wanna eventually help build some soup kitchens up. I always see that in my future. I used to attend soup kitchens a lot. That was my main source of nourishment,” he said.

Continuing to Give Back

Like Michael, Deanna felt the pangs of hunger from a young age.

“When I was a child, we had to go to churches to get food,” Deanna said. “I’ve been homeless. I know what it is like to not know where your next meal is coming from or to not know what you are gonna do on a daily basis.”

“This program gives me a chance to give back because I know what it’s like to be in that situation,” she said.

Despite everything Deanna went through, her desire to give back is ever-present.

Throughout her time in FoodWorks, Deanna worked at a 7-Eleven. Shift after shift, she would see the same people — people she got to know and helped despite having so little herself.

“At work, I deal with drug addicts and prostitutes,” Deanna said. “I deal with all kinds of people, and it hurts me to see people like that because I have been there.”

“Even with a couple of the prostitutes, I try to help them as much as I can. I will ask if they are ok or if they need anything,” she said.

For some of the graduates from FoodWorks Class 28, the only motivation they needed to complete the program was to make those closest to them proud.

“Life for me was a rollercoaster ride; there’s no doubt about it,” Damon said. “I grew up in east Baltimore in one of the toughest projects you could ever imagine.”

Damon’s early adult years were punctuated by life on the streets and a prison sentence. The catalyst for changing his life was having kids.

“Once you see their faces and their smiles, you know that they didn’t ask to come into this world and that the Lord blessed you with being able to have these children. And that responsibility kicks in,” he said.

Damon’s desire to provide a better life for his kids was realized thanks to the FoodWorks program.

Within days of starting the culinary training program, Damon got employed. He’s not only providing for his family, but he’s also making them proud.

“When they see me in uniform, it’s like ‘Man, Dad. Oh, man.'” Damon said. “It’s just a blessing. My mom just turned 78 years old and for her to be able to go through all the things she went through in life with me and my ups and downs, to see me now on a positive path — it’s just awesome.”

A “Never Give Up” Attitude

Maryland Commerce Secretary Mike Gill served as keynote speaker for FoodWorks Class 28’s graduation ceremony, and inspired the graduates, attending families, culinary industry luminaries, and other VIPs with a speech about the “key ingredients for success.”

“You gotta have persistence. You gotta have that ‘never quit’ attitude,” Secretary Gill said. “I bet if I get a chance to know you all — you’d say, ‘Mike, you wanna know about persistence? How much time do you have?'”

When it comes to FoodWorks Class 28, Secretary Gill’s assumption couldn’t have rung truer.

Each graduate embodies what it means to persist. In fact, persistence is the motto Donald — one of the younger graduates — lives by.

“A person who never makes a mistake is a person who never tries anything new,” Donald said. “When you’re taking those steps in life, and you mess up, don’t look it as a mistake — look at as a lesson. Think about how you can use the lesson to better yourself.”

“I like to have the mentality that nothing can bring me down. Everything that happens, you just gotta look at the positives, and see how it makes you better,” he said.

Through persistence, graduates from FoodWorks Class 28 are not only making their own lives better, but they are also bettering the lives of their families and their communities.

If you or someone you know could benefit from our FoodWorks culinary training program, apply for one of our upcoming classes.

3 thoughts on “Achieving Culinary Success for a Better Life”