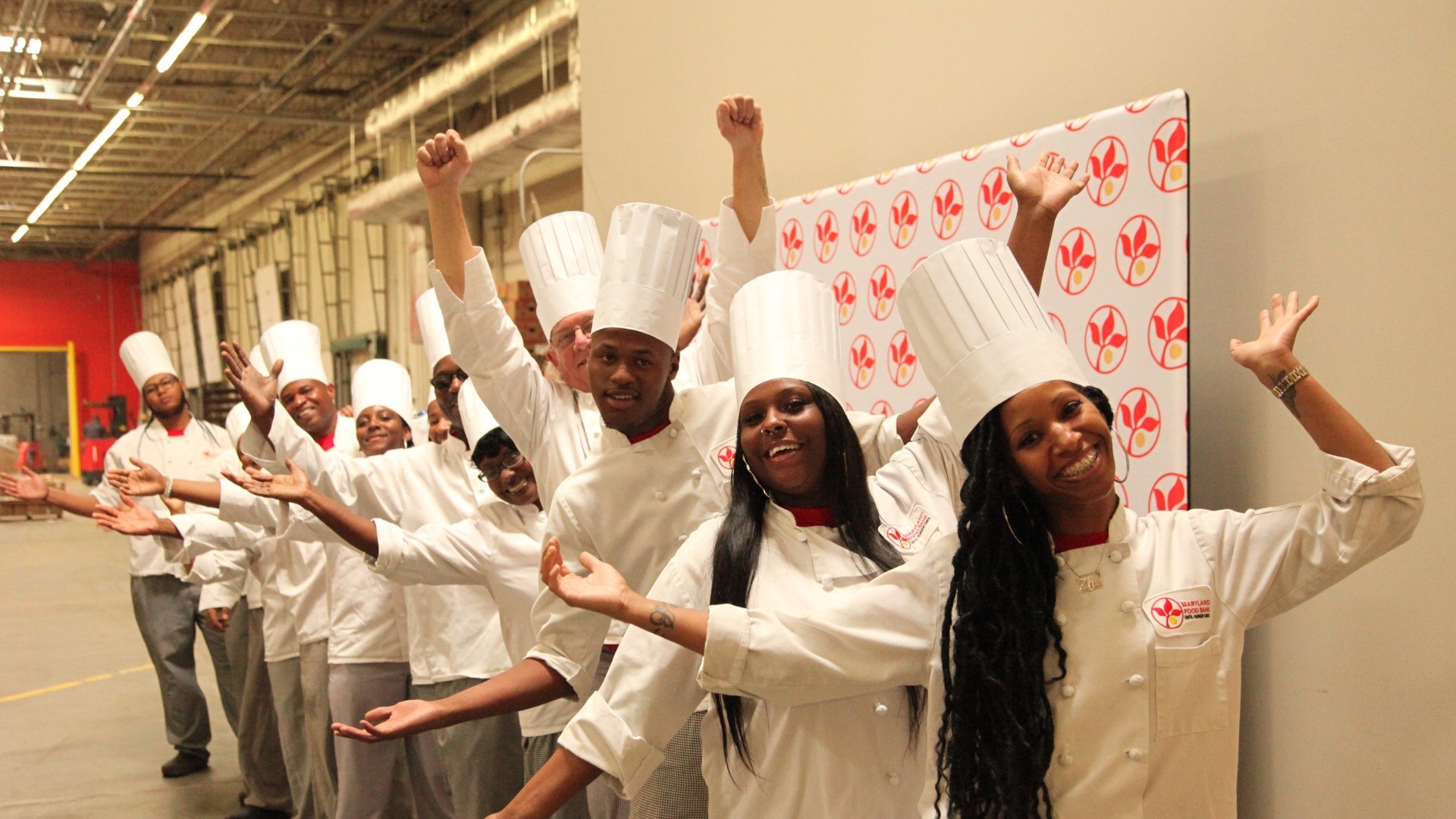 Just over 12 weeks ago, FoodWorks Class 29 graduates walked into the doors of our Charles T. Bauer Community Kitchen. Trading in their street clothes for chef whites, they went on a journey that would equip them with a ServSafe Manager Certification, job readiness skills, and the knowledge to flourish in the culinary industry.

Looking at the graduates on Friday, October 19, 2018 — donning tall, white hats and proudly clutching on to their certifications – it’s hard to image the hurdles they had to overcome to get to where they are today.

The Road to Resilience

Although each of the 13 graduates of FoodWorks Class 29 had a challenge to overcome before the 12-week culinary training program came to an end, our dedicated FoodWorks staff, led by Emmanuel “Manny” Robinson, the food bank’s executive chef and director of food service & education, created an environment that not only helped the graduates become chefs, but one that taught them that anything is possible. 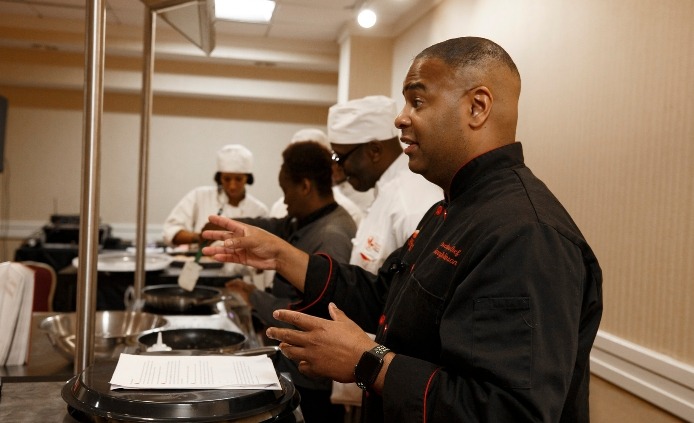 “Chef Manny taught me to keep pushing myself and push forward in life,” said Brandie, 18. “He encouraged everyone. He had a great impact on my life. It’s inspiring and makes me kind of emotional.”

Our FoodWorks Class 29 graduates not only faced challenges head-on while mastering their culinary skills, they also helped prepare more than 37,000 meals for hungry Marylanders — talk about inspiring.

Finding Solace in the Culinary World

Matthew, 58, was beaming during graduation.

On that day, he found enormous strength in himself to look into the future, overcome the past, and make the most of his present situation — living on the streets of Baltimore. 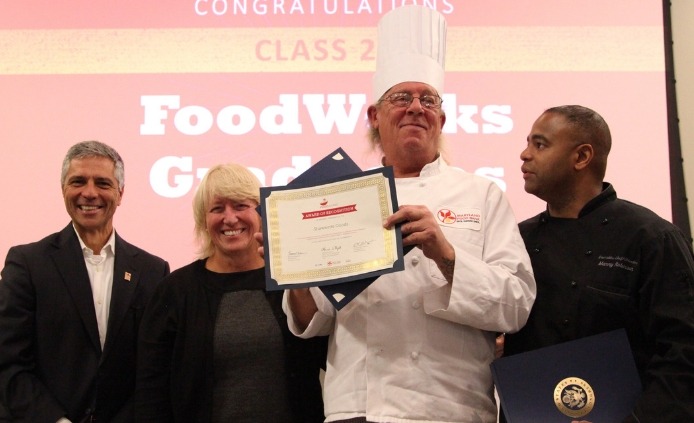 Matthew’s life had been shaped by losing everything he held closest to his heart. His tipping point was when his daughter died when she was 18-months old.

“It was something that she had from birth, but nobody caught it,” Matthew said. “She got sick all of the sudden. By the time they found out, her organs were shutting down.”

Matthew, originally from Pennsylvania, spent more than three decades in New York City. Living in a close-knit Irish community, Matthew loved and lost, yet again. This time, tragedy struck on the fateful day ingrained in so many of our minds — September 11, 2001.

Throughout all of the hardship, Matthew also struggled with addiction.

“And right now, I’m living on the street. But I’m here,” Matthew continued. “I should get out of the kitchen right now and try to get a bed for the night, but it’s important that I’m here.”

Although Matthew was able to finetune his culinary skills during his time at FoodWorks, he credits the program in teaching him patience and resilience.

“I’m coming out of here a different person.”

Earl, 23, and Angelo,18, are both from Baltimore City. Although their childhoods were different, they both had to overcome living in impoverished communities marred by violence.

“Words can’t explain the stuff I’ve been through,” Angelo said.

“Every time you leave out the house, you gotta look back and forth to make sure nobody will rob you or kill you. You gotta watch your surroundings every five minutes. That doesn’t feel right.” 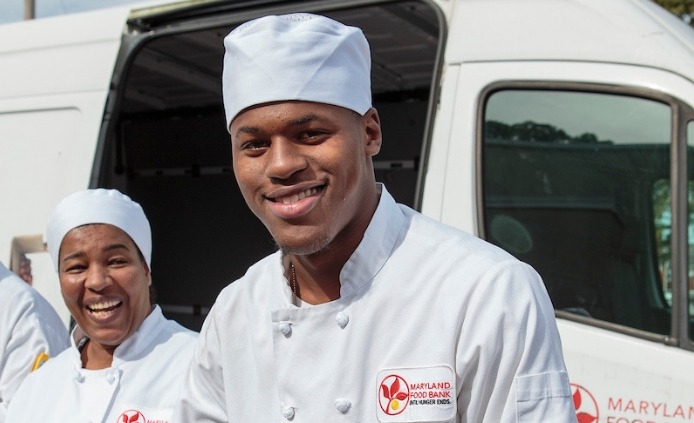 Earl grew up in a similar environment. 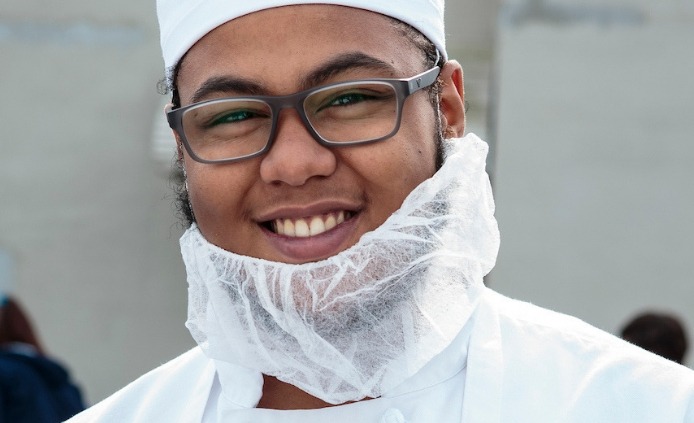 Both men are breaking free from the soundtrack of their childhoods thanks, in part, to a new life in the culinary world. And despite all that they have been through, their main goal is to put others before themselves.

“I want to nourish people and put a smile on their faces through food.”

The FoodWorks culinary training program, a collaborative effort between the Maryland Food Bank and the Community College of Baltimore County, is currently accepting applicants. Many of our graduates have been hired at leading restaurants and institutional caterers, including Woodberry Kitchen, the Horseshoe Casino, Compass group, The SEED School, and Baltimore County Public School.

If you or someone you know would like to take part, we encourage you to apply today.

← Causing Change at the 2018 Hunger Action Symposium Pack to Give Back 2018: Holiday Meals for Hungry Marylanders →