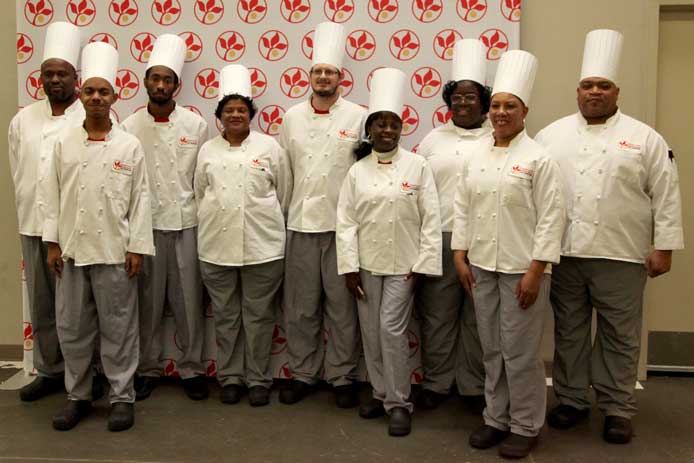 On Friday, January 20, we celebrated the accomplishments of our 22nd graduating class from our culinary program FoodWorks. Nine graduates received ServSafe certification and job-readiness training. The ceremony was attended by family, friends, program partners and local officials.

It was impossible for Ron Willis to gather his thoughts on Friday.

“I’m sitting here trying to tell you how I feel and if I told you how happy I am it would be a lie because I can’t put my feelings into words,” he said.

Willis, 42, of Baltimore, was one of nine students to graduate from the FoodWorks program this week. The program is a collaborative effort between the Maryland Food Bank and the Community College of Baltimore County that provides low-income students with culinary training and ServSafe® certification.

The journey to graduation felt long for Willis, who has been living in a homeless shelter for the last six months and commuting to the food bank five days a week.

“It’s a 25-minute walk to the bus stop in the morning and then I take three buses to get here,” he said. “When class is over, I have to do it all over again.”

But learning advanced culinary techniques was enticing and helped to keep him motivated. Preparing meals for the food bank’s emergency network of community organizations also fueled Willis’ passion to stick with the rigorous schedule. This class, one of the food bank’s smallest graduating classes, prepared more than 35,000 meals to help food-insecure Marylanders.

“Being able to help other people means a lot to me because I know what it feels like to go to bed at night hungry,” he said. “The problem is real and it gives me so much joy to know I’m helping other people who are like me.”

“Some nights I would go without eating,” he said. “But then Chef Rich took notice and started giving me snacks to take with me. That really meant a lot because I have trust issues with people… But I learned that the people here were really here for me and didn’t want anything from me except for me to succeed.”

Lewis, the food bank’s sous chef, and Emmanuel Robinson, the food bank’s executive chef and director of Food Service & Education, are faced with tackling and troubleshooting different life and learning issues for each student and each class as a whole.

“Looking at this class, there was a lot of instruction provided around being solution-driven, adaptable, and resilient that the textbooks don’t cover,” Robinson said. “Chef Rich and I really found ourselves drawing from our own personal experiences to provide a real-life snapshot of the obstacles they may face in the workplace and in life.”

And while some students could relate to the real-life examples, others learned best in different ways.

“This was a diverse class with students from drastically different backgrounds,” Robinson said. “We had to adjust things to connect with them to cover all the types of learning styles, attitudes, and life challenges.”

But as different as the individual students were from one another, they transformed into a team when they needed to. Despite their differences there was an obvious sense of comradery and internal support for one another that Robinson hadn’t seen from prior classes.

Leaning on his instructors and his classmates helped Willis make it through the program, even when he wanted to quit. When he was in need of guidance, words of encouragement or homework help, he often called on his classmate Stephen Hall.

“He would even call me late at night and wake me up from sleeping,” Hall said. “But as part of this program, we are encouraged to support and empower one another and that’s what I did. I didn’t want him to give up, I wanted him to succeed, so I answered the calls.”

Hall, 51, of Baltimore, was one of the class leaders and fell into the role naturally. After working as a line cook for about eight years he decided it was time for him to advance his culinary career. He enrolled in FoodWorks to learn more about food safety with the hopes of earning ServSafe certification.

“Once I started doing job searches, I saw that you’re more likely to increase your odds of getting a better job if you’re certified,” he said.

Hall, and each of his classmates, passed the certification test using the knowledge they’d learned throughout the course. Hall said he knew many of the lessons before they were presented but didn’t realize he was practicing them all along.

“I follow standard operating procedures when I’m working,” he said. “But there are tasks in the kitchen, like the in-depth parts of cleaning and sanitizing, that I didn’t know what they’re called but I was already doing those things without even recognizing it or using the correct terminology.”

His ability to follow instructions and execute on technical tasks were some of the reasons Hall was awarded the “Best in Kitchen” honor at graduation. And while his kitchen skills exceeded expectations, he found the life lessons most valuable.

“We had quite a bit of life-skills training,” he said. “And through that part of this experience, I’ve learned to do something I very seldom did before and that’s using intrapersonal communication to evaluate myself and what I’m doing.”

Dreaming for the Long Run

Like Hall, Lisa Roberts emerged as one of the leaders early on. But unlike her classmate, she had very little culinary experience but effective and advanced communication skills. She was honored as valedictorian of the class at graduation.

“Coming into the first day I was excited,” Roberts, 50, of Owings Mills said. “I knew it was going to be a lot of hard work, but I was ready for the challenge.”

The class has given her a sense of confidence and security in knowing what direction she’s heading. Prior to joining FoodWorks, she was looking at office jobs, a career path she had been following for years.

“If I wouldn’t have taken the chance on this program, I probably would have got a decent administration position somewhere,” she said. “But that’s not my passion. I just would have been earning a paycheck just to earn a paycheck.”

With her newfound confidence, she hopes to open her own catering business or a food truck soon. The class showed her that a culinary career is a viable option for a successful future.

All of the students were presented with program diplomas as well as special certificates from Congressman John Sarbanes, and were given some advice from Rehan Khan, chef and owner of Umami Global Bistro. Khan stands as an example of how far hard work in the culinary industry can take someone. As an immigrant from Pakistan, Khan came to the U.S. with just $400 about 16 years ago. He spent seven years working for a pharmaceutical company before deciding to pursue his passion for cooking and opening his own restaurant.

“Whatever your background is, whatever challenges you are facing, do not give up on your dream,” he said. “It might take a long while, mine took 16 years, but don’t give up.”

As Roberts listened to Khan give his address, she felt a mix of emotions. His story inspired hope, but venturing into something totally new is scary, she said.

“I’m a little fearful,” she said. “But I think it’s less fear that I’m feeling and more excitement than anything.”

Khan offered Roberts a job at his restaurant. As of Friday, she was considering the offer as well as weighing her options with a few other offers.

“Gathering around food has always been part of my life,” she said. “I have so many memories surrounding food and cooking and this is the beginning of many more to come.”