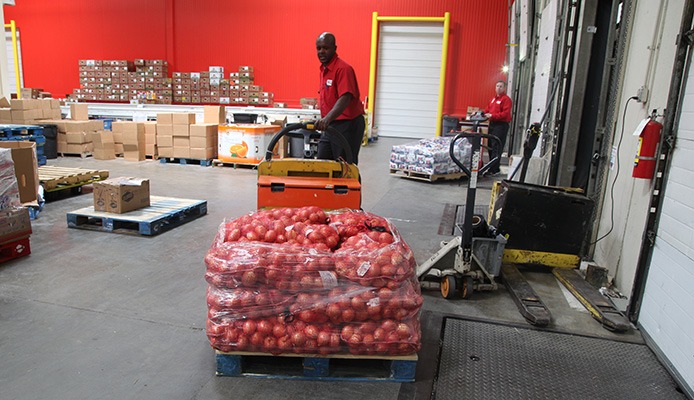 Our Baltimore facility passed an AIB International safety audit earlier this month. The Salisbury facility is due to be audited next month. Grants provided funding to make safety upgrades to the facilities.

While all members of the Maryland Food Bank staff work to put food on the tables of those in need, Adria Aceto is primarily focused on the quality and safety of how the food is handled and works to improve those practices from MFB headquarters in Baltimore.

“Making sure food is safe is really important because we feed hundreds of thousands of people a day, and we never want our food to be compromised,” said Aceto, the food bank’s food safety officer. “We have a responsibility here at the food bank to make sure everything is handled properly.”

Over the last year and a half, Aceto and the MFB operations team have spent thousands of hours preparing for a vigorous food safety audit that was successfully passed earlier this month as part of a new Feeding America requirement in partnership with AIB International. But the process was a team effort that was accomplished thanks in part to local foundations including the Marion I. and Henry J. Knott Foundation, which awarded MFB a $75,000 grant to help the food bank make essential improvements to support operations. According to Knott Foundation Executive Director Kelly Medinger, this grant had a different focus.

“We felt that upgrades to the Baltimore facility would have a positive effect on the way the food bank is able to service the entire population throughout the state, and provide even higher food safety practices than was already being done,” she said. “Our founders Marion and Henry Knott were always very compassionate and generous to those in need because they came from humble beginnings. They wanted to support organizations that help people succeed in life, and food is definitely an essential part of becoming successful.”

In addition to training key food bank staff members on food safety, improvements were made to the food bank’s equipment and the Baltimore building itself. New digital temperature monitors, for instance, are being installed in food storage coolers so the operations department can monitor the temperature from a cell phone application, while a solar-powered bird repellant device was installed on the front of the building to emit a sound that keeps birds away. Each of these improvements contributed toward a passing of the audit at the Baltimore facility. The Salisbury branch of the food bank is scheduled to be audited next month.

“We couldn’t have done this without the support of organizations like the Knott Foundation, Aceto said. “We also appreciate the support from the State of Maryland Department of Human Resources, Feeding America, Cargill, and the Henry and Ruth Blaustein Rosenberg Foundation.”