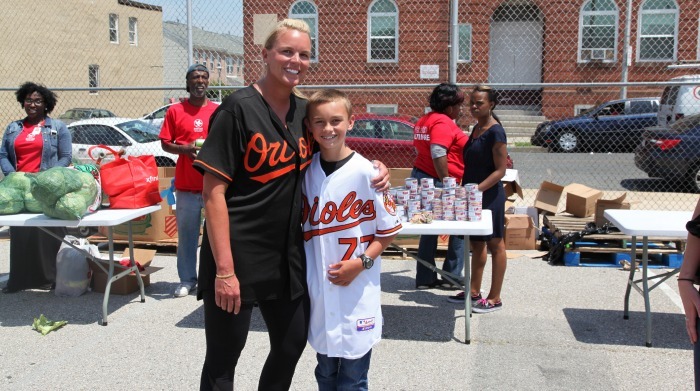 The volunteers gathered at William Pinderhughes Elementary School were as diverse as the city of Baltimore itself. Community members of all ages, MFB volunteers, school leaders—and, at the heart of the event, the Baltimore Orioles entourage—joined together to distribute food to households in need.

“The city of Baltimore embraces the Baltimore Orioles,” explained Angela Showalter, as she handed food items to a few of the people assembled. “These individuals support us and send a lot of love in our direction, and it only seems right for us to send it back to them.”

The event was a colorful, motley gathering, with a handful of Orioles players—Brad Brach, Travis Snider, Miguel Gonzalez, and Ryan Larvarnway—along with their respective wives and other Orioles wives, all sporting the unmistakable orange of Baltimore baseball. Meanwhile, dozens of MFB volunteers and network partners bustled around in bright red shirts that read: “We Feed Baltimore.”

Rena, a member of Macedonia Baptist Church—a MFB network partner and community pillar in the area—had returned to her old neighborhood to help distribute food at the event.

“I grew up here. I went to school right there,” she explained, pointing across the street. “Things were different back then. Now I come through and the windows are boarded up. Stores I used to go to are closed.”

But the state of the community wasn’t simply a reflection of the recent unrest in Baltimore, explained Tsanonda Edwards, the school pantry coordinator at William Pinderhughes Elementary.

“There aren’t a lot of grocery stores around here to begin with. But then with the looting last month, people had no where to go,” he explained. “One thing I want everyone near and far to recognize is that this is not just about what happened three weeks ago. It’s ongoing. This distribution is a microcosm of exactly what the families need year-round.”

As the event came to a close, Orioles catcher Ryan Lavarnway watched the kids and adults exit the lot with fresh cabbage, sweet potatoes, and carrots.

“This is a community that comes out and supports us on a nightly basis, so we want to be here for them when they need it most,” said Lavarnway. “It’s not just about how much food they can get, but it’s also about providing them access to healthy foods,” he added.

Support the Maryland Food Bank at the Orioles Food and Funds Drive! We’ll be collecting nutritious non-perishable food items and monetary donations during the team’s series with the New York Yankees from June 12-14.