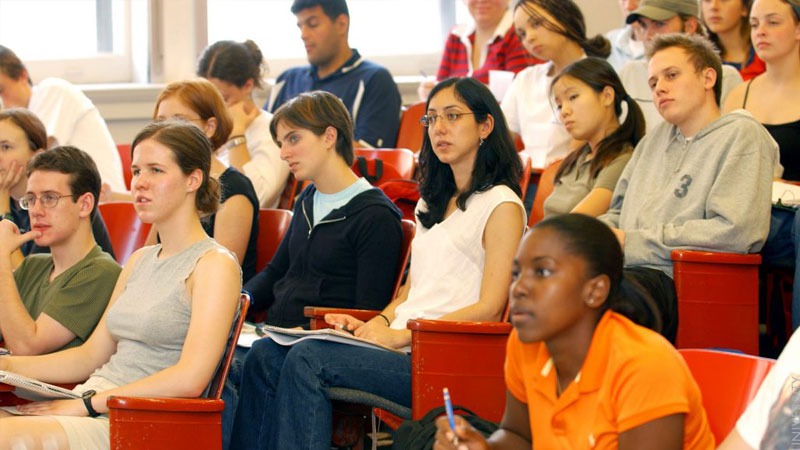 College hunger is a much more widespread issue than many people may realize. We visited Towson University and spoke with a student experiencing food insecurity, as well as an administrator, and a pastor who are actively working to find solutions to the problem.

For college-bound high school seniors, this time of year is about choice. Did I choose the right college? What major should I select? Should I join a sorority or fraternity? One thing no college student chooses, though, is to go hungry.

College costs continue to rise faster than the rate of inflation, and wages remain stagnant, causing more and more families to struggle to afford tuition, housing, books, and the other expenses associated with higher learning. As a result, a staggering number of college students are finding themselves unable to eat well on a consistent basis.

On campuses across the country, the food-insecure rate is four times that of the overall U.S. population, according to a recent study conducted by a team of campus-based organizations.

College Hunger by the Numbers

Surveying almost 3,800 students at 34 community and four-year colleges across 12 states, the study found that nearly half (48 percent) of the respondents reported food insecurity in the previous 30 days, and more than one in five (22 percent) admitted to experiencing very low levels of food security that qualify them as hungry.

Most of these food-insecure students are working and receive financial aid, and many are on some type of meal plan. However, only 25 percent reported using the Supplemental Nutrition Assistance Program (SNAP).

SNAP is One Possible Solution to College Hunger

“Hunger on college campuses is an overlooked, but very real issue,” said Katie Beltz, director of government programs for the Maryland Food Bank. “At Towson University, we make regular presentations on SNAP and other assistance programs available to people who are food insecure, but there are more than 150 colleges in our state, so we have a lot of work to do.”

In addition to these presentations from MFB’s SNAP Outreach Program, Towson University has embarked on several innovative initiatives to address food insecurity on campus, including the Food Insecurity Support Fund (FISF) and FoodShare.

Christina Olstad, Towson’s assistant to the vice president for student affairs, administers FISF, which provides immediate financial assistance to students in need through their meal cards. The idea came about after Olstad noticed signs of food insecurity during some of her meetings with students of concern.

“Students wouldn’t raise the food issue with me directly, but I saw that some of them would take advantage of the trail mix that I keep on my desk,” said Olstad. FoodShare, is a traditional food pantry where any student, faculty, or staff member who finds themselves in need can take up to 10 food or personal care items at a time.

“There was a tremendous amount of food coming from the end-of-year ‘Move Out’ collection drives that I knew we could use for students in need,” said Pastor Laura Sinche, who runs the program out of the Baltimore Lutheran Campus Ministry.

College Hunger Through the Eyes of a Student

One of those students is Anna, a 19-year-old sophomore at Towson.

“Being food insecure is hard, embarrassing, and comes with so many difficult emotions,” she explained. “FoodShare has allowed me to focus more on my studies and not where my next meal is coming from.”

Finding ways to alleviate food insecurity is nothing new to Anna. While unaware at the time, her parents struggled through some difficult financial times when she was young, but they found creative ways to shield her from the effects. Today, she sometimes relies on the kindness of friends, ones who are willing to include her for dinner. She helps to cook and clean up after “because it means I don’t have to feel like a charity case.”

Awareness is the First Step Towards Solving College Hunger

While stories like Anna’s are on the rise, the support programs available to people in her situation are not. The College and University Food Bank Alliance has only 475 registered members, but there are nearly ten times as many colleges and universities in the U.S.

“When food-insecure kids transition from high school to college, their situation often gets worse, not better,” said Meg Kimmel, MFB’s chief external affairs officer. “More colleges and universities are becoming aware of hunger on campus, which is an important first step. At MFB, we want to continue to raise awareness of the issue and foster integration between collegiate food assistance programs and the larger anti-hunger safety net.”

*The College and University Food Bank Alliance, the National Student Campaign Against Hunger and Homelessness, the Student Government Resource Center, and the Student Public Interest Research Groups. “Hunger On Campus: The Challenge of Food Insecurity for College Students,” October 2016.

** Anna’s name was changed to protect her anonymity.