A Culinary Journey for FoodWorks Class 25 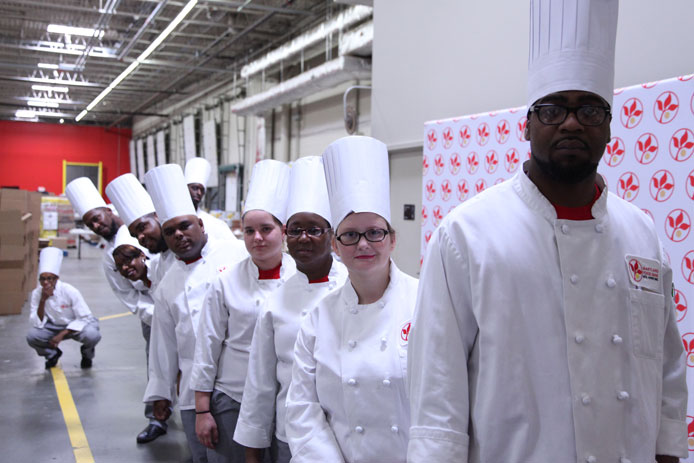 On Friday, October 20, we gathered to celebrate the 25th graduating class of our FoodWorks culinary program. Throughout their 12-week journey, our 10 graduates received ServSafe certifications and job-readiness training, all while producing nearly 25,000 meals for food-insecure Marylanders. MFB staff, friends, and family members of the graduates, as well as state and community leaders, helped celebrate the accomplishments of FoodWorks Class 25.

The Charles T. Bauer Community Kitchen is unassuming; it looks like any industrial kitchen you might come across. It’s as neat as a pin, fitted with standard appliances and brimming with fresh, local ingredients. But that’s where the similarities end.

Instead of cooking up dishes for paying restaurant patrons, this kitchen prepares meals for thousands of food-insecure individuals throughout Maryland. Instead of being staffed with salaried cooks, this kitchen acts as the classroom for our FoodWorks students — some of whom never imagined taking on a culinary career.

“Cooking is something I never thought I’d be doing,” said Markita Harris, a mother of three young children.

Harris was familiar with the Maryland Food Bank. She volunteered here to meet the requirements of the government assistance she received. At the time, she didn’t realize this same place would provide her with skills that would shape her future.

Sitting in the FoodWorks classroom, Harris’s entrepreneurial spirit shone brightly as she discussed her hopes to open up a food truck or a pop-up restaurant. “I’m learning a lot,” she said. “This will put me in a good financial state.”

During their 12-week culinary training program, FoodWorks students produced nearly 25,000 meals for hungry adults, children, and seniors in our state.

This was a natural continuation for Malik Rogers — at 25, he’s no stranger to cooking for people who crave nothing more than a tasty meal. Rogers learned how to cook during the time he was incarcerated between 2008–2015.

“Cooking became a passion,” he explained. “People in the jail came to me to cook for them.”

When he was released, Rogers knew that he wanted to cook as a career. College was out of the question for him though, so he took what he could get. When he got offered a position as a cook at the Olive Garden, he accepted.

“I didn’t get paid a lot of money,” Rogers said. “I knew I needed to take my culinary career further.”

That’s what FoodWorks provided him. An opportunity to not only cook, but a chance to learn about food safety, meal planning, and food presentation.

Although Gayle Bradley’s haven has always been the kitchen, she didn’t get to take on the culinary world until later in life.

Bradley had her first child when she was 15 years old. Over the next decade, she had two more children and took on different jobs just to make ends meet.

“I worked in factories,” Bradley said. “The wear and tear took a toll on my body.”

After years of working jobs she didn’t like, Bradley made a pact with herself. “I wasn’t gonna work that hard for someone, especially when it was something I didn’t love,” she said.

Bradley knew she wanted to be part of the culinary world, but due to financial strains as a single mother, she didn’t have the means to get professional training. Instead, she opened up a cake and catering business in 2015.

Bradley was her own boss and making just enough to get by. But without the proper training, only so many doors would open for Bradley.

When she heard about the FoodWorks program in May of this year, Bradley applied on the spot. After hearing she got accepted into the program, she screamed in excitement.

“I came from a background where people told me I would never be anyone or do anything,” Bradley said. “I’m now part of a community that supports me and believes in me.”

Culinary skills are the tangibles FoodWorks graduates walk away with. These skills will help them cook delicious meals safely, with technical precision. However, our graduates left with so much more than an ability to cook world-class cuisine.

Addressing her fellow graduates and instructors, Bradley took to the podium saying, “I moved away from my natural family, only to gain an extended family.”

Paving The Way For a Brighter Future

During the graduation ceremony, keynote speaker James Rzepkowski, assistant secretary of Workforce Development and Adult Learning at the Maryland Department of Labor, Licensing, and Regulation, shared his own story of unemployment with our graduates.

Having been turned down by hundreds of job opportunities, Rzepkowski stressed the importance of perseverance — of not giving up. He told the FoodWorks graduates to confidently approach future employers with the knowledge that their skills will elevate any kitchen they enter.

“Walk into an employer saying ‘Hire me, I have skills,’” Rzepkowski encouraged. “Confidently tell them, ‘Hire me, I can do this for you.’”

Chef LeAnn Foulks shared a similar sentiment with the graduates, highlighting her experience in the kitchen.

“My first job in the kitchen was tough,” Foulks said. “I watched, and I listened. I did everything that was asked of me.”

← Gleaning Wisdom: Thanks for a Great Season Fighting Hunger on the Eastern Shore with CareFirst →