Gleaning Wisdom: Thanks for a Great Season | Maryland Food Bank
skip to main content
Back to News

Gleaning Wisdom: Thanks for a Great Season 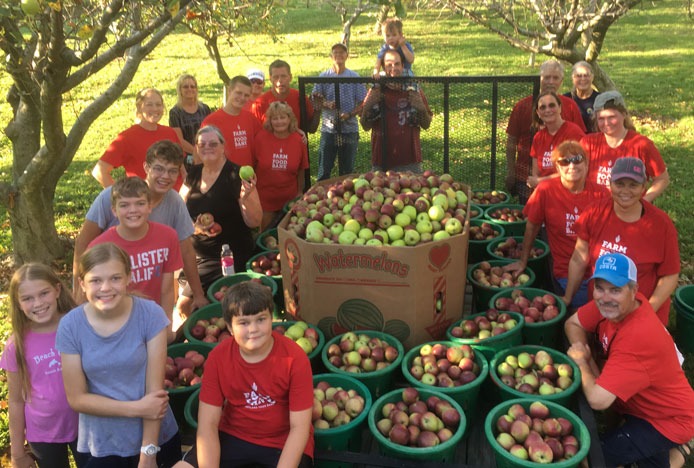 While I had thought that the previous blog was going to be my last one for this season, so much has happened that I wanted to share it with you. And I also wanted to say thanks to some special people that have helped to make the Farm to Food Bank Program so successful.

During the week of September 16-22 there were seven gleanings at three different locations!

On two occasions, we gleaned apples from a private residence that overlooks the Chesapeake Bay in Stevensville. Volunteers always seem to enjoy helping there — it is a beautiful orchard and they can see the literal fruits of their labor. The result of their hard work was nearly 5,000 pounds of apples that went to our Salisbury branch and were then distributed to hungry Marylanders.

Thanks For Letting Us Glean

Three of those seven gleanings found us in the Nagle family’s pickling cucumber fields, where volunteers and pre-release inmates collaborated to glean more than 7,200 pounds of vegetables.

This is the 7th season that the Nagles have allowed us to glean their fields. If you haven’t done it before, you may not realize that gleaning cucumbers is hard work—sometimes they are lying all over the place behind the mechanical harvesters and sometimes there are very few.

On a side note, it was a member of the Nagle family who let me know that the Maryland Food Bank was starting Farm to Food Bank Program, and suggested that I get involved.

Thanks Poplar Hill and “Phil”

The remaining two gleanings were in one of my favorite places of all—the watermelon field. In my late August blog, Managing Logistics, I wrote about how the overabundance of rain on the melons lead to disease, making this particular gleaning opportunity even more special. The watermelons were seeded sangrias, which are my personal favorite due to their level of sweetness.

I am so incredibly thankful to the farmer in Caroline County who granted permission to our team, which included some guys from the Poplar Hill Pre-Release Unit.

Speaking of Poplar Hill, I’d like to give a special note of recognition to Officer Phillips, who has brought out pre-release crews from that facility every year since I’ve overseen the Farm to Food Bank Program.

He is a retired veteran who is also retiring from his position as an officer with the Maryland Department of Corrections at the end of October. “Phil,” as he is affectionately known, is a kind-hearted man who is well respected by all the pre-release inmates who  glean in the fields prior to their release.

I am really going to miss Phil and wish him the best in his retirement. Hopefully he finds time to enjoy life after many years serving his country and state.

Thanks to Caroline County Public Schools

On Monday, Sept. 25, the Farm to Food Bank Program traveled to a golf course in Timonium that has 50 apple trees. I would never have guessed that this program would take me to such a prestigious place. This was our first visit and with just two volunteers and a few employees, we gleaned almost 1,000 pounds of apples! Next year, I think we’ll be able to do even more.

That same week, I had the opportunity to experience Maryland’s annual Farm to School Program, which showcases how schools partner with local farms to serve children fresh fruits and vegetables. Check out their website to see what foods were served in local schools.

During my visit to Lockerman Middle School in Denton, I was fortunate enough to be a small part of the amazing program that Beth Brewster of Caroline County Public Schools and the Chesapeake Culinary Center put together. The children sampled pork (that was raised and harvested by Future Farmer of America students), cantaloupe soup, watermelon salad, cheese from Chapels Creamery, cucumber salad, crab soup, and catfish.

Thanks to the Volunteers!

Finally, if you are reading this prior to October 15, we are still seeking volunteers for a sweet potato gleaning in Monkton that afternoon. You can sign up by registering on the Farm to Food Bank volunteer page.

The gleaning season may be winding down but, rest assure that all of us at the Maryland Food Bank will continue to work hard for our neighbors in need… until hunger ends!

Amy Cawley has been the Farm to Food Bank Program coordinator since 2010. She has a deep passion for agriculture, which fuels her efforts to make sure every food-insecure Marylander has consistent access to nutritious, fresh produce.