Fighting Hunger on the Eastern Shore with CareFirst 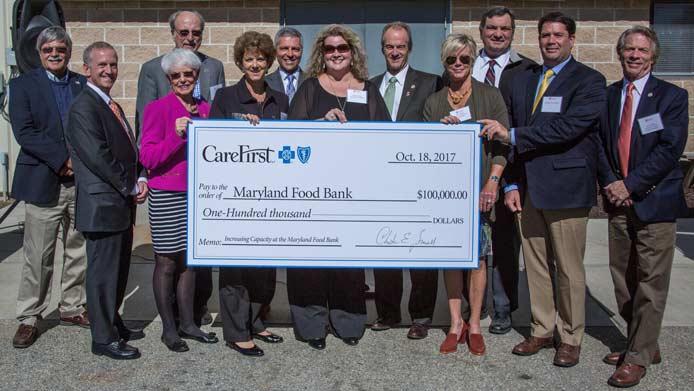 Thanks to a sizable investment from CareFirst BlueCross BlueShield, the Maryland Food Bank – Eastern Shore facility will undergo a major revitalization — drastically impacting our ability to provide food-insecure individuals on the Eastern Shore with healthy food.

How can the Eastern Shore, Maryland’s agricultural hub, be home to some of the poorest individuals in the state? How can an area provide the majority of the state’s fresh produce, poultry, and dairy house so many food-insecure adults, families, and children?

Our Eastern Shore branch in Salisbury has been grappling with these questions since its inception in 1981, when it first began working to reduce the pockets of food insecurity that prevents thousands of Eastern Shore residents from reaching their full potential.

The good news is that last year, the Maryland Food Bank – Eastern Shore was able to distribute about 5.9 million pounds of food in the eight counties that make up its service area — that’s more than 13,000 meals every day.

While this small but mighty team has tirelessly fought against hunger on the Eastern Shore, they have been all too aware that a lack of resources has impeded their ability to serve the constant demand for nutritious food.

Thanks to a $100,000 donation from CareFirst BlueCross BlueShield (CareFirst) and other generous donors, our Eastern Shore branch is undergoing a revitalization project that will likely increase our ability to distribute food by an estimated 40% in the coming years.

To commemorate this transformative undertaking, local and state officials gathered with leaders from the Maryland Food Bank and CareFirst for a special check presentation on Wednesday, Oct. 18.

Three years ago, we launched the Food First capital campaign to raise funds to improve our facilities, with the intention of using most of the money to expand and renovate our branch in Salisbury. Thanks to the generosity of organizations like CareFirst, we are now in a better position to fight hunger on the shore and throughout the state.