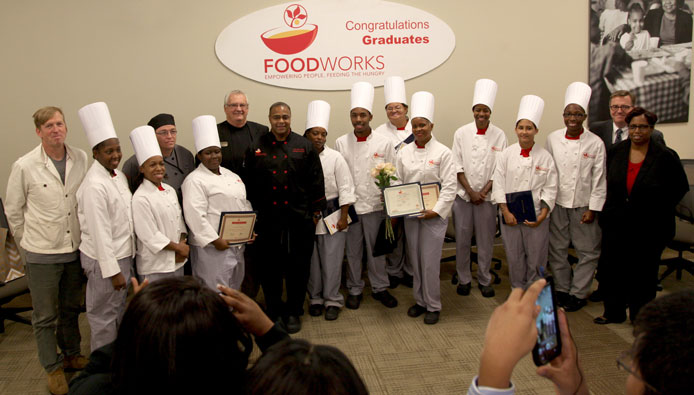 In the past, Alethea Brooks struggled to find a career that excited her. She tried working several jobs and going to cosmetology school but that didn’t work out. She also did secretarial training without success. Brooks, 53, hadn’t felt passionate about any of the careers she tried and was looking to do something meaningful.

“Then, I started working in a bowling alley’s kitchen,” Brooks said. “I had made a man a grilled cheese sandwich and he told me it was one of the best sandwiches he’d ever had. That made me feel great. That was what I was looking for.”

The compliment motivated her apply for the FoodWorks Program, something she had been thinking about for six years. She applied for the first class in 2010, but wasn’t selected. After trying her hand at other kinds of jobs and training programs, the FoodWorks class continued to stay on her mind. When she applied earlier this year, she was accepted and ready to learn.

“I feel like cooking brings people together,” she said. “It’s what I want to do. It’s what I’ve always wanted to do, I just wasn’t able to do it until now and I’m so happy.”

Brooks was one of 10 students who graduated Friday after 12 weeks of intensive training with Chef Emmanuel Robinson, also known as Chef Manny.

Robinson said this class exemplified perseverance. Many of the students had to overcome life circumstances that had previously prevented them from reaching their personal goals. This class also spanned generations, with the youngest students being just out of high school, while Brooks, as the eldest student, has a few years on them.

“No matter what obstacles our FoodWorks students face, if they practice consistency and never giving up, they can have positive outcomes,” Robinson said. “I thought this group was really going to have trouble coming together because of the age divide, but they were able to gel better because of it. They learned from one another instead of resisting against their differences.”

The program, which is a collaborative effort between the Maryland Food Bank and the Community College of Baltimore County, encourages team work while giving students the tools they need to pass their individual ServSafe certification tests. It also allows students the opportunity to gain real-life experience in a working kitchen.

Brooks said being able to work in the kitchen was the most valuable and rewarding part of her culinary education. Her most memorable moment happened in the third week of class when she had gone into the temperature-controlled room where food is packaged for community organizations.

“I looked over and saw steaks being packed and I had worked the grill that day,” she said. “And I felt so good to know that I had done that. I was really proud to see something I had cooked would be going to families who need food.”

Throughout the course of the class, students are expected to work as a team to produce meals that are distributed to the food bank’s partner network of organizations. This class prepared more than 39,000 meals for Marylanders in need.

According to Janice Chappell, being able to prepare meals to help families motivated her to get to class each day.

Even though life has thrown Chappell, 46, many curveballs that could have worn on her, she continues to maintain a positive outlook. She was named the student who has the “Best in Life” attitude for this class. She joined the program after being laid off from an IT job about a year ago. As she began to look at the life she was living, she decided to pursue her long-term dream of opening a bakery and café, and applied to FoodWorks to help meet her goals.

“I thought I was coming to this program to learn how to cook,” she said. “But I learned about myself too. I learned how to deal with people from all walks of life, and that self-awareness is key to working together with others.”

Valerie Smith also learned a few lessons about herself by working through the class curriculum.

Smith, 40, hasn’t been able to focus on her personal goals for about 20 years. Her dream of owning her own business was put on hold when she had her second child.

“I was in culinary school for the first eight and a half months of my pregnancy and I had two classes left,” she said. “But then I had the baby and I never went back.”

But Smith didn’t give up. She worked in the childcare field and had three more children, but continued to stay involved with cooking by working part-time on the weekends for a catering company. When she heard about the FoodWorks program, she knew this was her chance to chase her dream.

“Even though I’m 40, I’m still young and this is my passion,” she said. “This opportunity presented itself and I knew I had to jump on it.”

Her passion fueled her motivation, and Smith was named valedictorian of the class. She hopes to get a job as a sous chef in a hotel restaurant setting and eventually buy a food truck.

“I feel more confident now,” she said. “And I’m excited to enter the culinary workforce and put what I’ve learned from FoodWorks into action.”

At Friday’s graduation ceremony, the students listened intently as James Beard Award-winning chef Spike Gjerde addressed the class. Chef Gjerde, who owns several local restaurants including Woodberry Kitchen and Parts and Labor, is a distinguished FoodWorks supporter and has hired graduates from other classes.

One of these former students, Malik Cheeks, was at the ceremony in support of his cousin Kyre Gaither, who was graduating from the program and received the same “Best in Kitchen” award Cheeks did a year ago before joining the Woodberry Kitchen staff weeks later.

During his remarks, Chef Gjerde reflected on what he loves best about working in the culinary field.

“One of the great things about being in the kitchen is the constant transfer of knowledge. Knowledge is constantly being shared and things evolve in a way that I think is one of the most special parts of being in this business,” he told the group.

In the spirit of sharing knowledge, Chef Gjerde highlighted some of his favorite kitchen slogans, or as he called it, “kitchen wisdom.” Among them included one offering a lesson in perseverance and resilience: ‘You’ve got to burn a few to brown a few.’

“I remind myself of this when things aren’t going right. If you’re trying to get a good finish on something, don’t sweat it too much if a couple come out a little crispy,” he said.