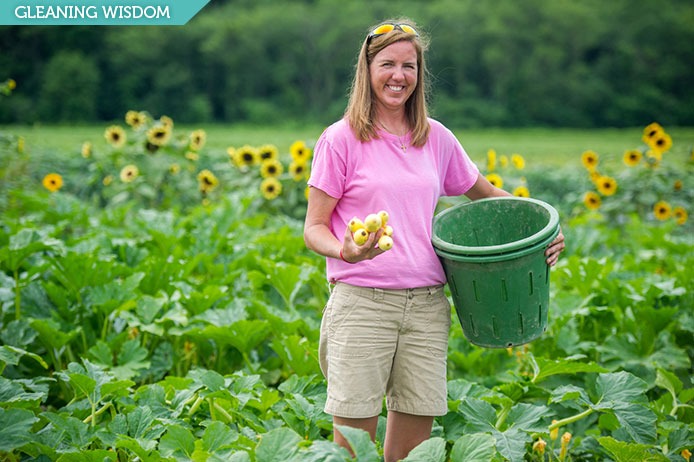 The Farm to Food Bank Program is an innovative and cooperative effort between farmers, volunteers, and the Maryland Food Bank which helps get nutritious produce into the hands of food-insecure Marylanders. Amy Cawley, who runs the program will blog regularly through the growing season, giving you an insider’s view of how we get fresh fruits and vegetables from farm to food bank.

“How did the Farm to Food Bank Program start?”

This is a question I get asked often.

In 2010, Maryland and the rest of the United States was just beginning to recover from the Great Recession, an economic decline that dramatically increased the number of food-insecure individuals in Maryland.

As the leading hunger-relief organization in the state, the Maryland Food Bank was eager to find ways to boost the amount of nutritious food to meet the growing need. Realizing that there were thousands of farms in the state producing millions of pounds of fruits and vegetables, the food bank reached out to three of them to see if they would be a consistent source of fresh produce, and the Farm to Food Bank Program was born.

Since I came on board in 2010, the program has grown from those three farms and tens of thousands of pounds of produce to more than 50 farms producing more than a million pounds on an annual basis.

Recently, began a partnership with NRG and Black Gold Farms to raise produce on 3.5 acres of donated land. In 2016, they grew potatoes. This year we have one acre of sweet potatoes, one acre of sweet corn, and one acre of a combination of tomatoes, squash, cantaloupe, watermelon, and green peppers.

Thankfully agriculture is Maryland’s #1 industry and we have a wide array of farmers to work with. Prior to this program, the food we received and delivered was not as nutrient dense as the produce we procure through the Farm to Food Bank program. I think our clients appreciate the farm-fresh produce they receive.

The program is always a win for the farmers, volunteers, inmates, MFB as well, with everyone helping to reduce food waste and further our mission to end hunger in Maryland.  And I think our program is a model for other states who are interested in starting a similar program.

When I was hired, one of my responsibilities was to build a relationship with the Maryland Department of Corrections to utilize pre-release inmates to help glean farmers’ fields. In one of the very first gleanings, the guys gleaned 11 bins of sweet corn (which is about 6,600 ears, or 5,500 pounds) from a farm in Caroline County. That, to this day, is still the record for sweet corn gleaned at one time.

Just a few years later, a different group of inmates harvested nearly 500,000 pounds of watermelons from another Caroline County farm in a matter of weeks!

Although many farmers were comfortable allowing inmates in their fields, others were not, so

I reached out to Volunteer Maryland to help expand the program. Our ongoing partnership with Volunteer Maryland, plus individuals and groups that sign up to volunteer on our website allows us to continue to glean a tremendous amount of produce.

Little by little, our volunteer pool has grown to include a wide range of people. Recently, I had a group of high school students from Lott Carey that gleaned 3,300 pounds of pickling cucumbers.

While the produce that farmers donate makes a big impact, it is not sufficient to meet the need of the more than 682,000 Marylanders who don’t have enough to eat. Thankfully we receive funding from the Governor of Maryland each year to purchase produce from Maryland farmers. This allows not only for farmers who are unable to donate product to make a living, but it gives us a great deal of flexibility to we can continue to feed our hungry neighbors – especially in times of increased need like the holidays.

In the early days of the program, I rode around in my 2WD Chevy Colorado, and found that it really wasn’t built for hauling produce. Thankfully, the Richard A. Henson Foundation, Perdue, and Sherwood Ford were kind enough to donate a used 2012 Ford F-250 that allows me to haul two bins (although I have to leave the tailgate down to fit them both in!)

This fall things will really change, due to a generous grant from BJ’s Charitable Foundation, via Feeding America. The grant has allowed us to purchase a refrigerated box truck that I will use on the weekends to keep up to six bins of gleaned produce fresh until Monday when our Eastern Shore branch is Salisbury opens for the week.

Farm to Food Bank has grown so significantly over the past few years that we’ve had to make some considerable changes to our Salisbury facility to be able to get the produce into the hands of our food-insecure neighbors quickly.

This fall, we’ll to break ground on a 2,400-square-foot cold storage space that will not only help us store quality produce we glean and contract grow, it will also extend the shelf life of produce and perishable product, reducing potential food waste. Thanks to the kindness of CareFirst BlueCross BlueShield and other donors to our Food First capital campaign, we will be able to distribute more nutrient-rich, locally-grown produce, which will help us move toward the development of healthier Maryland communities.

One thing I especially love about this program is the education that takes place about where food comes from. Many out there think food comes from the grocery store. That may be true, but it is only part of the story.

Farm to Food volunteers learn things that they just simply can’t elsewhere. They gain an appreciation for farming and get to know their farmers and the food they grow, all while providing a glimpse of how much work really goes into producing food in Maryland.

Throughout the growing season, I’ll update you every two weeks on the latest gleanings, volunteers, new partners, and all of the other things that spring up from the Farm to Food Program.

In the meantime, if you would like to support the Farm to Food Back Program, you can make a donation, or volunteer to spend a day with me out in the field.

Amy Cawley has been the coordinator of the Farm to Food Bank Program since 2010. She has a deep passion for agriculture, which fuels her efforts to make sure that every food-insecure Marylander has consistent access to nutritious, fresh produce.