Honoring our Heroes Against Hunger 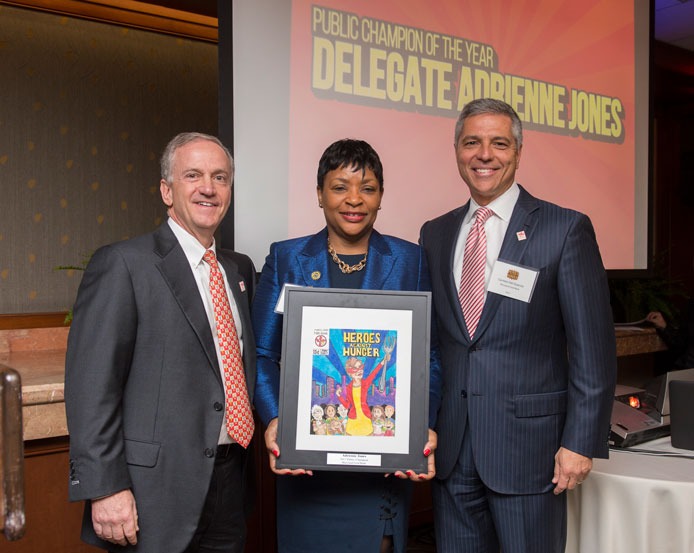 On Thursday, May 11, food bank executives, supporters, and advocates gathered to honor three of our most dedicated allies in the fight to end hunger in our state at the Heroes Against Hunger awards ceremony.

In one of the wealthiest states in the nation, there are hundreds of thousands of people who don’t have enough to eat. The Maryland Food Bank works each and every day to combat this injustice with the help of dedicated individuals and organizations whose efforts are nothing short of heroic. On Thursday, May 11, food bank executives, supporters, and advocates gathered to honor three of our most dedicated allies in the fight to end hunger in our state at the Heroes Against Hunger awards ceremony.

Public Champion of the Year

One supporter whose clear passion and dedication for the food bank has strengthened over the years is Maryland State Delegate and Speaker Pro Tem Adrienne Jones, who was honored as the Public Champion of the Year. Jones, who served as a MFB board member for 12 years, continues to tirelessly advocate for hunger relief in both local and statewide conversations.

“We are fortunate enough to live in one of the wealthiest countries on earth. We are blessed to be able to sustain ourselves with a bountiful food supply,” she said. “Still, there are individuals and families who are not able to have three meals each day to nourish themselves.”

Since leaving the board, Jones continues to advocate for funding and support from the government while also introducing the next generation to the food bank’s mission. Last year she organized an event for high school students to participate in a volunteer day at the food bank.

“I am especially concerned because, as Chair of the State of Maryland’s Education and Economic Development Subcommittee I know how important it is to the learning process for every child to have a good meal in order for them to be able to concentrate on their studies,” she added.

Jones is motivated by the hope that someday there will be a solution to the meal gap and all Marylanders will be able to put food on the table.

“I would like there to be no need to have places that had to collect food for distribution, that it would be freely and readily available to all those in need,” she said.

While some advocates use their voices to fight hunger, the food bank is fortunate enough to have supporters who don’t hesitate to spring into action. T. Rowe Price, a Baltimore-based global investment firm, was honored with the Big-Hearted Believer award for the generous contributions the company’s associates have made to the food bank.

The company, which has been supporting the food bank for more than 20 years, has contributed to the fight against hunger with food and monetary donations, volunteers, and sponsorships. John Brothers, president, said he’s thankful associates at T. Rowe Price are willing to take part in the movement to make our state a better place to live.

“Walking just one block in Baltimore, or throughout the state, you are more than likely to run into people or organizations that everyday put their hands together and are thankful for the work of the Maryland Food Bank,” he said.

“The T in T. Rowe stands for Thomas — our founder,” she said during the acceptance of the award. “He was really focused on philanthropy and giving, and that’s still holds true today for the whole company.”

Powerhouse Provider of the Year

Since opening its first Maryland store in 2004, Wegmans has been eager to help their hungry neighbors.

The regional grocery store chain was honored and named the Powerhouse Provider of the Year for the combined support they’ve provided through large-scale food donations. By the end of this June, the regional grocer will have donated more than 10 million pounds of food toward the fight to end hunger in Maryland.

Linda R. Lovejoy, community relations manager, said fighting hunger is an important cause for the company because they want to make sure the communities they’re working in can prosper, Lovejoy said.

“The continued success of our company is linked to the vitality of the community,” she said.

“Wegmans continues to grow in Maryland and as we grow, we give more from each new store location,” Lovejoy said.

While the Heroes Against Hunger ceremony celebrated each of the three award winners, guests also heard from individuals whose lives have been changed by the food bank, including Tracey Coleman.

Coleman hit hard times when her husband lost his job and her family began to struggle. She called the food bank for help and was welcomed with open arms. Today, Coleman’s family is able to put food on the table again, and attributes part of their stabilization story to food assistance.

“You’re helping people like me who just needed that bridge to get back on their feet again,” she told the audience in attendance.

Seeing the impact of the food bank’s work is what inspires many companies to support the mission to end hunger. CSX joined the organization in honoring this year’s award winners as the “Superhero Sponsor”. Brian Hammock, resident vice president, said the company has more than 1,600 miles of tracks throughout the state and is dedicated to helping the communities it works by supporting the mission to end hunger.

“From Curtis Bay to Cumberland the food bank is there,” he said. “We see the need and the great work the Maryland Food Bank is doing. We’re able to see the mission in action every day and that’s why we’re inspired to help.”