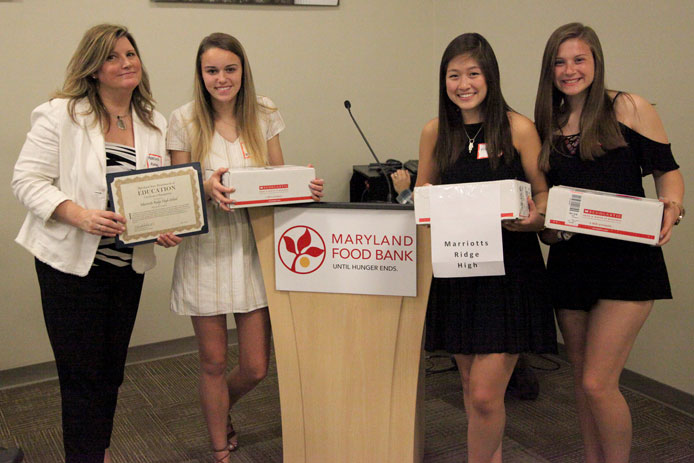 Every year kids across the state take part in our Kids Helping Kids initiative by pitching in to collect food and funds to help other kids who may be suffering from food insecurity. On Thursday, May 18, we celebrated this year’s top fundraisers at the Kids Helping Kids awards ceremony.

Shannon Vernon had a proud mom moment when her son, William Cogle, came home from his job with a box of food to donate to his school’s Kids Helping Kids food drive last fall.

“I’ve always taught him to give back,” Vernon said. “And seeing him take part in something like this shows me that he’s hearing what I’ve been saying.”

Cogle, a junior at South River High School in Anne Arundel County, works at his local grocery store and purchased food to donate with his paychecks. Thanks to his hard work and the donations of his classmates, Cogle’s school was honored as the top donor at the annual Kids Helping Kids Awards Ceremony on May 18. The school community contributed more than 14,400 pounds of food and $24,100 to the annual food drive, which mobilizes students to collect donations to help other hungry kids statewide.

For Cogle, the concept really hits home. Vernon said her son was a previous beneficiary of the food bank’s efforts when he was younger and received free meals through MFB’s Supper Club Program at a local community center. As a single mom, Vernon also visited a local food pantry from time to time when her son was growing up. On Thursday, she beamed with pride when her son accepted the award for his school’s collection effort.

“I think this is awesome,” Vernon said. “Being involved in this keeps him grounded and down to earth because he’s able to help others. I’m really proud of him.”

In addition to Vernon, parents, community officials, Department of Education leaders, and Maryland Food Bank executives gathered at the food bank’s headquarters this week to honor the campaign’s top fundraising schools. A total of 444 participating schools collectively donated more than 418,000 pounds of food and $110,500 toward the fight to end hunger in Maryland.

During the ceremony, Maryland State Superintendent of Schools Dr. Karen Salmon offered words of encouragement to the students and read the book, “The Giving Tree” by Shel Silverstein.

“I know the students and teachers put a lot of love into this program,” Dr. Salmon said. “And I think we have made a difference in this effort, but we still have a great need in this state.”

Planning for the Future

Haley Suh listened intently to Salmon’s presentation and contemplated how fortunate she is. “This is a good reminder of how there are people in need out there in the world,” she said. “There’s an entire world that exists outside of our community and not everyone has it as easy as we do.”

Suh, a junior at Marriotts Ridge High School in Howard County, helped organize a virtual food drive as part of the school’s Kids Helping Kids effort. She and her fellow students worked with a teacher to spread the word about the food drive through school announcements, e-mails, events, and on social media outlets like Facebook and Twitter.

“A lot of teens are involved in social media,” she said. “So instead of just reaching out to parents through e-mails, we wanted to get kids involved because it’s important for us all to understand community service and take part.”

“One thing we did was reinforced the fact that even if you’re not able to physically bring food to school — because it’s heavy or difficult to bring on the bus — that money is just as important,” she said. “A dollar donation is just as much a contribution as bringing in an actual food donation.”

Donations collected during the Kids Helping Kids effort were distributed to local food pantries and community organizations near the schools where the food drives were held.

The Kids Helping Kids campaign is slated to return this fall, so be on the lookout for updates at the start of the school year. Until then, you can support campaigns like Kids Helping Kids by donating to the Maryland Food Bank’s virtual food drive.