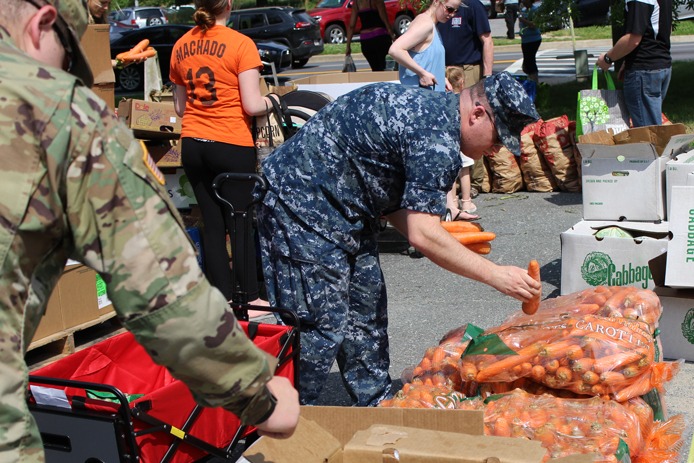 Families experience food insecurity on military bases just like civilian families, but getting assistance can be a big challenge for them.

There’s no question that military families already make enough sacrifices. Members of the military sacrifice their personal safety to protect their fellow Americans, military spouses often sacrifice career plans to relocate at a moment’s notice, and military children sacrifice time that they don’t get to spend with their parents. No member of a military family should have to sacrifice something as basic as food.

Yet for many of these families, food insecurity — or the inability to consistently access food — is a surprisingly widespread issue.

According to the 2016 Blue Star Families Military Family Lifestyle survey, 43% of respondents had participated in social welfare programs, such as the Supplemental Nutrition Assistance Program (SNAP) and Women Infants and Children (WIC), while 7% had experienced food insecurity in that year.

While the federal government does not provide much data on food insecurity among military families, members of the House of Representatives recognize the severity of the issue, and recently introduced a bi-partisan bill to provide some relief.

H.R. 1078, or the Military Hunger Prevention Act, “excludes the value of a housing allowance for a member of a uniformed service from any income, assets, or resources calculation for determining eligibility for any federal program issuing benefits for nutrition assistance (including the family subsistence supplemental allowance program).”

Should the bill become law, it would potentially make it easier for military families to enroll in SNAP, which offers nutrition assistance while providing economic benefits to communities.

How We’re Helping to Combat Food Insecurity Among Military Families

The Maryland Food Bank isn’t letting bureaucracy get in the way of providing much-needed assistance for these dedicated families. We’ve been combatting food-insecurity on and near military bases in Maryland through Pantry on the Go events since 2010. In 2013, USAA came on board to help us expand the program, and in that short time, we’ve distributed nearly 600,000 pounds of food to more than 14,000 military members and their families through Pantry on the Go events.

But we can do even more.

“We have a long history of helping Marylanders in need,” said Katie Beltz, the Maryland Food Bank’s director of government programs. “While we are proud of the work we do to assist members of the military and their families, we are eager to do even more to alleviate food insecurity on military bases in Maryland.”

Partners in the Fight Against Food Insecurity in the Military

Mike Dickson, founder of Seeds of Life Nurseries in New Windsor, hosts a pantry at Whittier Elementary School near Ft. Detrick in Frederick.

“At least half the families at Whittier are military families, many with limited incomes,” said Dickson. “Helping them with things like fresh produce and staple foods lets them focus on other priorities.”

At other bases around the state, the food bank partners with the United Service Organizations (USO).

“Service members know that no matter where they are in the world, the USO is one place that will make them feel at home,” said Chad Jones, Fort Meade public affairs officer. “The Maryland Food Bank partnership with the USO here on Fort Meade continues that tradition of service. Military families who need help know they can get some relief at the Fort Meade USO food bank.”

During a recent food distribution event at Ft. Meade, one military wife and mother shared her story.

Justine B., who lives on-base with her husband and two-year-old, expressed her gratitude for the program. “We still pay a mortgage back home, plus housing expenses here, which doesn’t leave us with much money. Our daughter can go through a carton of strawberries a day, so we are very thankful that the food bank and USO do this each month.”

It is our mission to end hunger for all Marylanders, including families that include active duty service members or veterans. Learn more about all of the Maryland Food Bank’s programs that can help them, including:

Serve those who serve by donating now.