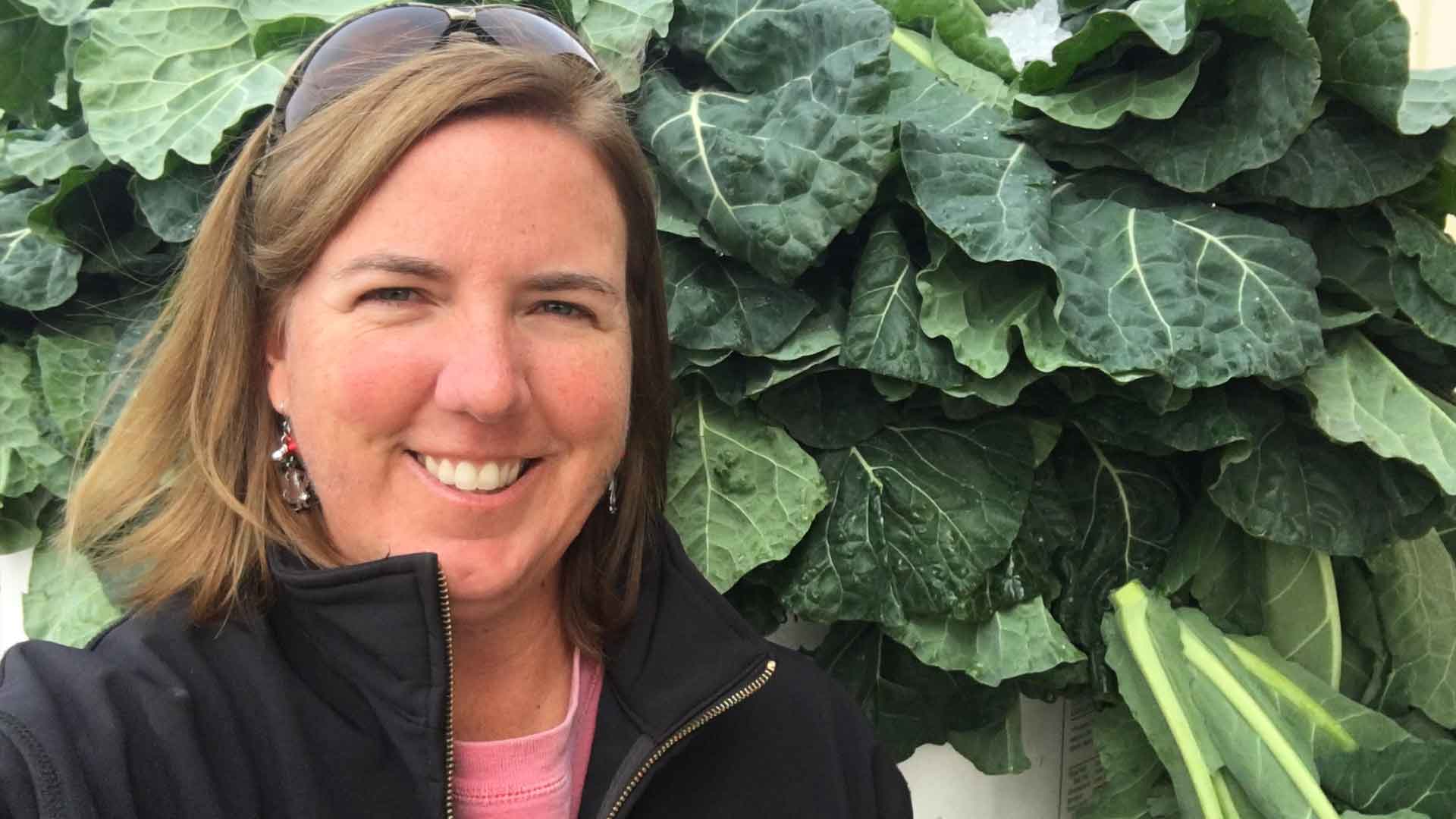 For many hungry Marylanders like Dundalk resident Milo B., their neighborhood food pantry may be their primary (or sometimes only) source of fresh produce.

“I’m 62 years old, and without the Community Assistance Network, I wouldn’t have this fantastic blessing of fruits and veggies. I come here after my check runs out on about the third week of the month and I am just so thankful!” said Milo.

And much of that produce comes from the Maryland Food Bank’s Farm to Food Bank Program, which is celebrating 11 seasons of growing this year. 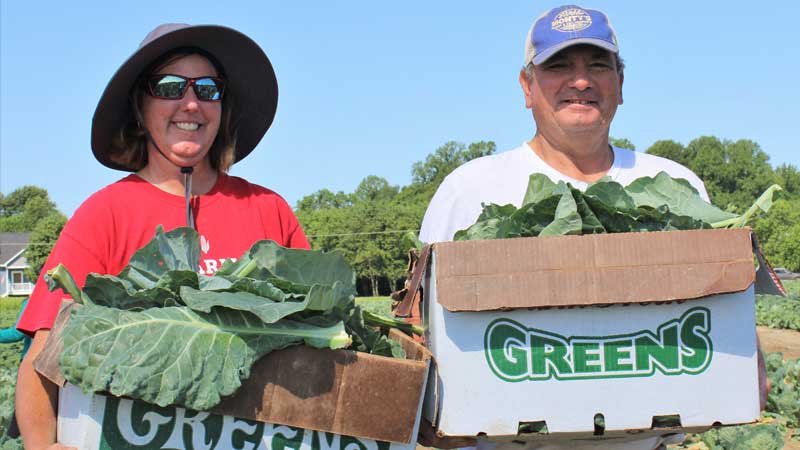 Since 2011, Amy Cawley has overseen the Farm to Food Bank Program, which combines field gleanings, donations, and contract growing to form the cornerstone of the food bank’s nutrition strategy. She has helped the program grow from its humble roots with just two partners — First Fruits Farms in northern Baltimore County and Arnold Farms in northeastern Queen Anne’s County — into a powerhouse produce program with more than 60 farms that infuse our statewide food distribution efforts with hundreds of thousands of pounds of nutritious fruits and vegetables annually.

And like every superhero, Cawley has her own origin story. 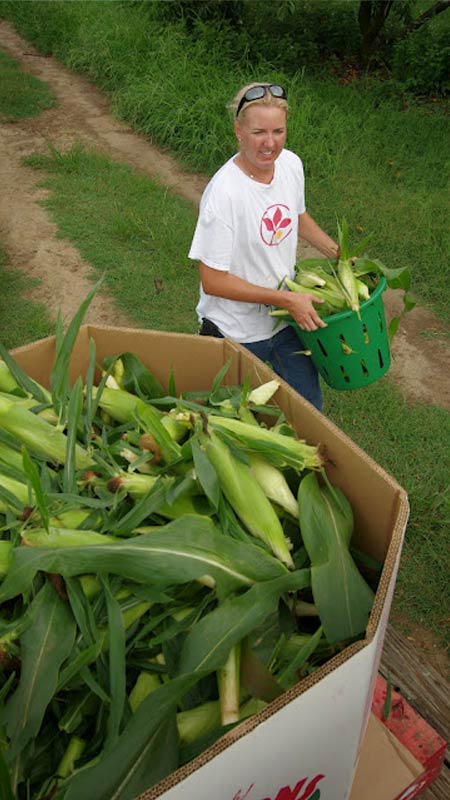 She recalls hearing back in April 2011 from her sister Hannah (who had recently toured MFB’s Baltimore warehouse) about the food bank’s interest in rescuing produce that was going to waste and their search for someone to help.
“I worked at a produce farm during the summers, and saw produce get thrown out all the time — it was always really frustrating to see, so I reached out to the food bank, and spoke with Butch Langenfelder,” Cawley said.

Following their brief telephone conversation, Langenfelder, MFBs Food Sourcing Manager, knew he had found the right person, and like a college coach going after a four-star recruit, set up a home visit.

“After we spoke, Butch ended up coming down to my parents’ house, and we all sat around the kitchen table and talked about the food bank’s need, and how building relationships with farmers could help hungry Marylanders,” Cawley remembers.
One of the first partnerships that she developed was with Taylor Produce in northern Caroline County, known regionally for their sweet corn.

“Our family has been blessed to be able to grow produce abundantly and believe we should share with those less fortunate,” said Matt Taylor, who has taken over the farm’s day-to-day operations from his father Calvin. “Amy made it so simple for us to participate — she brought bins, and as soon as we filled them up with sweet corn, she was there to pick them up — and while the quantity may have gone up over the years, Amy still keeps things simple.”

In her first two years as program coordinator, the Farm to Food Bank Program nearly double from 28 farms to more than 50, dramatically increasing the amount of healthy produce available to hungry Marylanders.

According to Cawley, 2014 marked one of the most important years in the program’s history, “for two reasons – the truck and hitting the million-pound mark of produce gleaned and donated in one growing season.”

After hearing about Amy’s struggles slogging around Eastern Shore fields in a small, two-wheel drive pick-up, Richard Henson, Perdue Farms, and Sherwood Ford outfitted her with her own personal “Batmobile,” a four-wheel drive Ford F250 with plenty of space for hauling gleaning supplies and produce. And due to some unusually warm and wet weather in 2014, Maryland’s farmers had an incredible surplus of seeded sangria watermelons, donating nearly 450,000 pounds of the always in demand fruit and brightening the summertime for tens of thousands of food-insecure Marylanders. 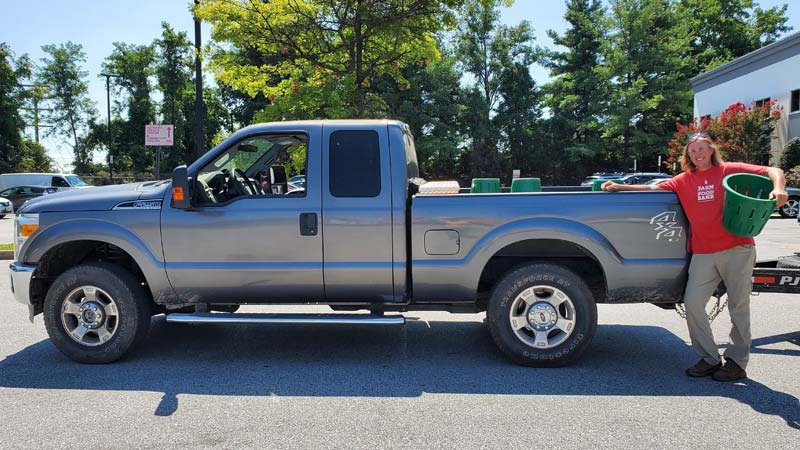 Over the next few years, more and more farms came on board, expanding the variety of vegetables and fruits we could distribute to statewide, including nutrient-dense greens. In 2018, the Bayer Corporation helped improve the program’s operations by helping fund a top-deck trailer, which allows Amy and her F250 to haul eight pallets of produce at a time, with room to spare for gleaning supplies. That same year, we expanded the cold storage capabilities of our Salisbury branch, allowing us to bring in and then distribute even more fresh produce locally.

In 2020, like the rest of the world, the Farm to Food Bank program was disrupted by COVID-19. But not even a global pandemic was able to deter one family’s passion for helping their neighbors in need. Glenn Elseroad was already growing some sweet corn and tomatoes on his land in Baltimore County when his son shared what he had seen at a local service organization.

“My son was driving by the Community Crisis Center in Reisterstown and noticed a long line of people who were there because they needed food – this really played on my heart,” Elseroad explained.

Elseroad connected with Amy Cawley, who he calls “a wonderful organizer, and someone I think the world of,” and he became MFB’s newest Farm to Food Bank partner. Elseroad’s kind gesture has resulted in several trailers of fresh vegetables over the last year. Due to some family health issues, Glenn has scaled back slightly in 2021, but knowing how important his work is to the well-being of his neighbors in need, he plans to donate directly to the Crisis Community Center later this summer.

In its 10 seasons of growing, the Farm to Food Bank Program has been one of our most impactful programs, ensuring that food that may have once gone to waste provides Marylanders with the building blocks needed to live a healthy lifestyle. And as we continue to increase the amount of nutritious food we distribute to food-insecure Marylanders statewide, the program will remain at the center of those efforts and help fuel Maryland’s recovery.