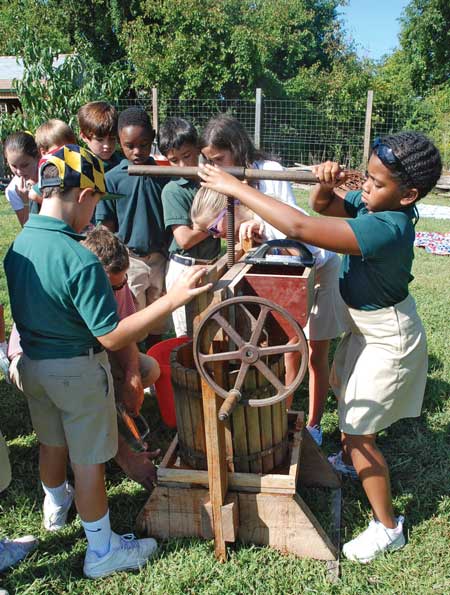 Planting, maintaining, harvesting, and donating fresh produce from community gardens teaches kids important lessons about agriculture and philanthropy. We checked in with two local schools — one in Baltimore County and one in Caroline County — to learn how their community gardens were impacting students, teachers, and neighborhoods.

Located on the banks of the Choptank River, Greensboro is in the heart of Caroline County’s rich farmland. However, Robin Brown noticed that some of the kids in the local 4-H Club were having trouble associating the food on their own tables as actual products of local agriculture.

“Because we live in a rural area, people just assume that kids get it, but some of them don’t,” she said. “They could drive past a corn field every day and not realize that it’s the same corn that’s in the store.”

So when an open green space became available on a plot of land at the nearby North County Library two years ago, the club proposed creating a community garden with the hopes of growing enough produce to donate to their neighbors in need. Their first growing season was a learning experience, Brown said, and the group was able to focus on just one vegetable: cucumbers.

“It was good practice,” she explained. “There’s a food pantry in town and we were able to donate a lot of cucumbers to them…it gave my kids a solid foundation for understanding the importance of leadership and service.”

This year, the group is growing additional vegetables and have called on volunteers from the community to rally around the project. “We’re in the process of building a salad table,” Brown said. “We have a couple of carpenters volunteering to work on it.”

Although the garden isn’t currently yielding large donations, it’s enough to start a conversation with the kids about food insecurity, something Brown is very familiar with as a result of the years she spent homeless in Washington, D.C. “In those four years of my life, not knowing where a meal would come from was the most powerless feeling I have ever had,” she said.

For Sharon Hood, director of the McDonogh School’s Roots Farm program, one of the motivating factors in maintaining the garden at the Owings Mills school is being able to watch the kids’ minds grow right along with the produce.

“Once they realize the value of food, there’s a big difference in how they look at it,” Hood said. “The littlest ones are so excited to put something in the dirt and see it grow.” The youngest students at the school take part in germinating and planting seeds at McDonogh Roots, while the older students in the upper school earn community service hours harvesting crops on the two acres the farm occupies.

Educational conversations geared toward specific grade levels accompany activities on the farm, including biology lessons and food ethics conversations for middle-school aged students. “By eighth grade, we’re able to get into deeper conversations about the impact of a farm,” Hood said. “You’re able to start helping them make those connections between food and the effects of fresh food.”

For the upper school students, lessons include learning about social issues and activism. The farm has donated hundreds of pounds of produce to the Maryland Food Bank for more than six years, with the goal of eventually donating 2,000 pounds of fresh produce in a single growing season.

“Last year we donated close to 800 pounds of food,” Hood said. “This year it may hover around 1,500 but just making it over that thousand mark would be nice. And then if we keep growing like we are, we should be able to meet our goal.”

This dedication to giving back is embraced by the 1,300 students at the school and falls in line with the values conveyed by its founder, John McDonogh, who believed in doing “the greatest possible amount of good.”

“Educating the school community about how many people have to go without food is part of the mission too,” Hood said. “We’re trying to teach our students that our community can make a difference by giving back.”