A Second Chance for FoodWorks Class 26 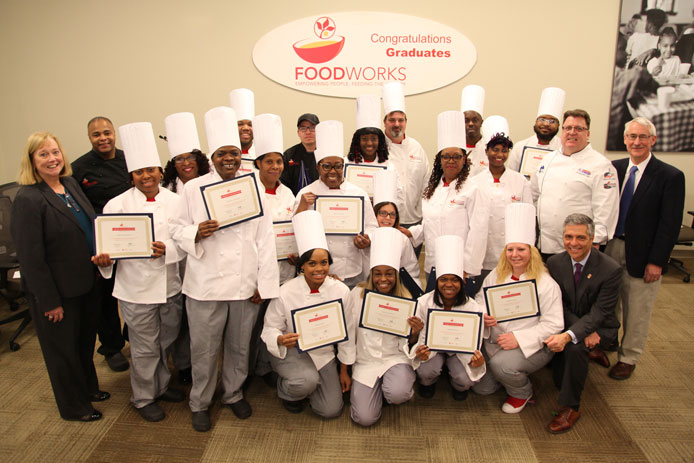 Our FoodWorks culinary training program not only provides job readiness skills to low-income students, but also supplies food-insecure Marylanders with nutritious meals. The graduates of this program — most of whom have overcome hurdles many of us can’t imagine — get a chance to uplift themselves, their families, and their communities. On Friday, January 26, we bid farewell to the 26th graduating class of FoodWorks in a special ceremony.

Turning 60 is a time many start thinking about retirement or winding down their career. Starting an entirely new career path? Well, that’s something very few people decide to embark on as they reach this milestone age. Betty Camphor happens to be one of those special few.

At the age of 60, Camphor is widowed. She’s on disability. A few months ago, she was hospitalized for two weeks.

That was a week before FoodWorks Class 26 commenced their culinary training in the Charles T. Bauer Community Kitchen.

But Camphor had already made up her mind. She was going to start a new career in the culinary world. And the Maryland Food Bank’s FoodWorks program would give her the knowledge and technical skill she needed to succeed.

On Friday, January 26, Camphor along with 16 other students of FoodWorks Class 26 graduated from the program.

Uplifting the Community with Culinary Training

FoodWorks, a 12-week culinary training program that is a collaborative effort between the Maryland Food Bank and the Community College of Baltimore County, provides low-income students with professional training and ServSafe® certification.

And while FoodWorks offers the professional know-how to succeed in our state’s most prestigious kitchens, it simultaneously provides the students with a unique opportunity to give back to the community.

In fact, the entire time the students are honing their culinary skills, they’re doing so while preparing meals for hungry Marylanders. During the duration of their program, FoodWorks Class 26 created approximately 22,000 meals to help support food-insecure individuals and families in our state.

And the spirit of giving back didn’t end as FoodWorks Class 26 parted ways with their training in our Charles T. Bauer Community Kitchen. For Camphor, giving back to the community will carry over to her new career.

“That’s one thing I would love to do. Have my own business and go to a lot of the assisted living centers, and go there and train people with disabilities about how to prepare their food and teach them how to cook for themselves,” said Camphor.

Shumaker and fellow FoodWorks Class 26 student, Nicole Jacobs, 31, heard about the culinary training program while living at a women’s home. Shumaker has been living at the women’s home for two years. Before that, her life was even more difficult.

“I was out on the streets for a long time. I was homeless; I lost everything. So coming here, this was one of the biggest accomplishments of my life,” Shumaker said.

She attributes FoodWorks to not only giving her skills in the kitchen, but aiding her personal growth.

“I’ve grown a lot. My confidence has changed. I was so shy when I first got here. And quiet. I’m still a little quiet sometimes, but I’ve grown a lot from being here,” Shumaker said.

Her confidence has grown so much that she was able to land a job with the Baltimore City Public Schools Food and Nutrition Services.

Shumaker is certain that her new career path will not only have a significant impact on her life, but it will greatly impact her young daughter’s life as well.

“It’ll be overwhelming for her. She’ll love it,” she said.

Her positive attitude and hope for the future carried over to the FoodWorks program — upon graduation, Shumaker was presented with the “Best Life Attitude” award.

A Role Model for His Kids

Daniel Rockwell, 35, knows what it means to put his kids before himself.

With nine children to support, Rockwell has been working in kitchens since 2002 to make ends meet; however, he didn’t have the culinary training to move up the rungs in the kitchen.

“I needed to know the rules and the regulations that I didn’t know. Now that I know ServSafe and other culinary techniques, it’s a whole different ball game,” Rockwell said.

Rockwell dedicated himself to his culinary training during his time with FoodWorks — so much so that he consistently received high grades and graduated as the valedictorian of FoodWorks Class 26.

His dedication also paid off outside of the classroom.

“Jobs are already coming at me. A lot of them. I already got hired,” Rockwell said.

And his kids are following suit.

“They wanted to be a cook before I came here. This made it more inspiring to them. I think they’re more excited than I am,” he said.

On Friday, friends, family, Maryland Food Bank staff, and leaders in the community gathered together to wish the students well as they said goodbye to their time at FoodWorks and entered the culinary world as trained chefs.

During the ceremony, they were sent off with words of wisdom by Len King, senior research chef at McCormick Spice, who took to the podium to instill the students with lessons he’s learned over the many years he’s been in the culinary field.

“It’s not an easy career, don’t let anyone fool you. There’s a lot of long hours. A lot of backaches. A lot of heartaches,” said King. “But in the end, it’s the passion; it’s the love of food that carries you through. It’s that drive; it’s that fire. It burns from within you. It’s going to continue to help you succeed when you think you can’t succeed anymore.”

“Be resilient; stay flexible; stay adaptive. And don’t forget the kitchen is a temperamental place,” said Robinson. “If you can power through that and stay focused and keep your internal motivations, you can go far.”

← Facing Hunger in Maryland: Barb The Tax Cuts and Jobs Act: How it Might Affect Hunger Relief Efforts →