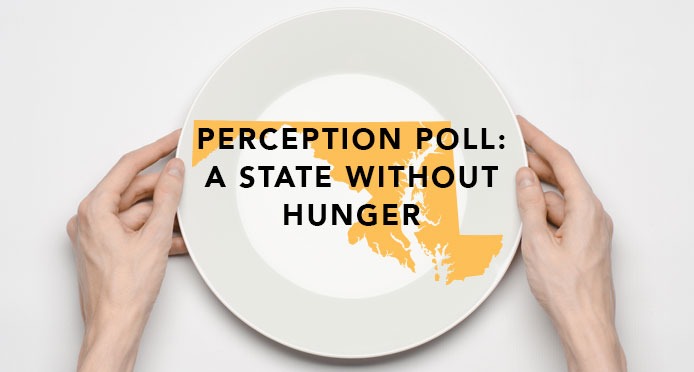 The results of a recent Maryland Food Bank public perception poll are in: Marylanders want hunger to be eliminated and believe more financial resources should be allocated to end hunger in our state.

The Maryland Food Bank (MFB) recently commissioned a survey of Marylanders to assess how people think about the issue of hunger in our state. The survey also evaluated their level of understanding on the issue and how MFB fights to tackle the problem.

More than 500 randomly selected Maryland households* in our service area were polled last fall, and although participants spanned various ages, ethnicities, economic backgrounds, and political beliefs, the majority agreed on one thing: they want and believe hunger can be eliminated.

But that’s just the beginning. Here’s what else we learned:

Despite our best efforts to end hunger, it persists

The economy may be improving, but our poll found that hunger continues to affect local communities, perhaps more than previously thought. More than one in four Marylanders (27%) admitted to being affected by hunger or food insecurity themselves, a noticeably larger number than other studies suggest. The survey also showed:

The Government’s Role in the fight to end hunger

About half of residents were surprised (29% a lot, 25% a little) to hear that more than one-third of hungry Marylanders make too much to qualify for federal food assistance. With the president’s FY19 budget proposal, even fewer people will be able to receive government food assistance.

Half of those surveyed think Maryland Food Bank receives the majority of our support from the State, even though most of our funding comes from individuals.

Perhaps the most encouraging response was that 93% of those surveyed want hunger to be eliminated.

To accomplish this goal, three-quarters of Marylanders (Democrats, Republicans, and Independents alike) considered the issue motivating enough to justify more support in the form of tax dollars.

We were heartened to find that ending hunger is a high personal priority for Marylanders. Asked where hunger would rank on their priority list, nearly one quarter (23%) of the respondents would place hunger “at the top,” while another 28% would call it an “above average” priority.

Do you believe it is possible to end hunger in Maryland?

If the fight to end hunger is high on your priority list, we hope you’ll consider signing this petition to stand up for and support our neighbors in need.

*This combined survey sample produced a margin of sampling error of no more than ±4.3% at the 95% confidence level. This means that if every resident within this geography had been interviewed, the actual results would differ by no more than that margin at least 95% of the time.

Say “no” to reducing and eliminating federal feeding programs